skip to main | skip to sidebar

The Best Intermarriage Discussion Ever

Between Ta-Nehisi Coates and Jeffrey Goldberg. It makes me really sorry I didn't go to a socialist Zionist summer camp.
Posted by The Pedant at 6:05 PM 10 comments:

Now, Vermont gives us "don't vote for a Jew" day - but not because the state itself has an institutional animus to the Chosen People.

Evidently, some very disturbed local political candidate in Vermont decided to put a bizarre, super-literal-reading-of-Leviticus screed in her "candidate section" of the state's election information publication. Thanks to the First Amendment, which allows people to say the most horrific and stupid things without government interference, the Vermont state government has to print it, since she is a candidate.

Special, "I'm not an anti-Semite" excuse? DNA testing shows that she's part Jewish. Because that, if true, is so compelling an excuse.
Posted by The Pedant at 12:26 PM 7 comments:

Hit a What Day?

Annie and I had this conversation in response to the fact that suburban St. Louis students are being punished for having a "hit a Jew" day:

ME: Next week: Jews hit back. Better hope they're the ACLU lawsuit kind, and not the King David Hotel kind.

ANNIE: No, they just organize a defense the next day in towns all over Persia. The king sealed it.

ME: That is why we must get a beautiful Jewess to seduce the King of Missouri.

Hatin' on the Persians

So, if you hadn't heard, Mattel, which makes Barbie dolls, is suing MGA, which makes Bratz dolls, which appear to be the children of Barbie and angels which caused god to flood the earth. The reason for the suit is that one of the principals of MGA worked for Mattel, and Mattel alleges that he came up with the half-space alien strumpet dolls on Mattel's time.

A verdict recently came out in favor of Mattel, but it's in doubt now, because one of the jurors was making ethnic slurs about Isaac Larian, the Jewish CEO of MGA.

The twist: I think Juror #8 was an Ashkenazi Jew, because the ethnic slurs were not about Mr. Larian's Jewishness, but the fact that he's an Iranian. I, sadly, occasionally hear the sorts of things that Juror #8 said from New York Ashkenazim, who evidently think that being Jewish is not exclusive enough of a club, or maybe to pretend that rich European Jews don't also have their fair share of swindlers and jerks. I don't really hear it outside the Judaic bubble, as Jewish/Iranian is more of a dichotomy there, and Iranians are (also sadly) associated with something a little more sinister than dishonest business practices.

I was of the opinion that no small part of being a modern Jew was getting over all the ethnic insensitivity that we ourselves have suffered in no small measure, but hey, maybe it was only to become middle-class so we can be even more prejudiced than our non-Jewish neighbors when it comes to the Middle East.
Posted by The Pedant at 8:13 AM 4 comments:

At the risk of sounding like someone's preachy rabbi, my take-away from the film was that the Joker is a catastrophe familiar to the Jewish people - no matter what you do, he comes with force, with malevolence, and destroys the virtuous just as easily as the condemned.

The only solution, it seems, is to accept that your virtue does not guarantee success, but that failure does not exempt you from the dictates of your conscience.
Posted by The Pedant at 10:50 AM 3 comments:

Not sure if anyone reads this anymore, but this seemed as good a place as any to post the news: CJ and I are engaged.

I guess that this is my equivalent of shouting it from the rooftops.
Posted by Annie at 2:14 PM 10 comments:

Well, the World is Certainly Safer for Doughnuts NOW...

Yet somehow, here they are, bleeding through into my reading today: 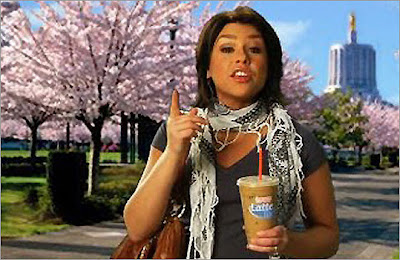 What happened was that Ms. Ray, a spokeswoman for fried starch purveyor Dunkin' Donuts, wore a garment that looked a lot to me like a houndstooth scarf in a television spot. Ms. Malkin evidently sees all objects with a pattern similar to houndstooth as resembling a keffiyeh (example), which in her eyes is per se a statement of solidarity with the intifada. So, obviously, it has to go off the air.
To clarify, there are three issues here:
1) Not all checked scarves are keffiyehs.
2) Wearing a keffiyeh doesn't mean that you're in tight with the Al-Aqsa Martyr's Brigade or Hamas.
3) Wearing a keffiyeh-looking object should not be enough to get you booted from American television.
The third should go without saying; we're a plural society here, and it really should be OK to wear a clothing item that millions of people, some of them Palestinian radicals, wear. Most agree that general clothing styles, by themselves, do not mean you subscribe to certain beliefs; e.g. this Ronald Reagan shirt does not mean you support violent Communist revolution. Sometimes a patterned scarf is a patterned scarf.
Furthermore, even if Ms. Ray has a copy of Walt & Mearsheimer's The Israel Lobby in her purse in that photo, as Americans we should be able to intelligently disagree about Middle Eastern policy without resort to blackballing doughnut commercials. Can we remember this again? Doughnuts. And coffee. Not policy.
Posted by The Pedant at 9:36 AM 10 comments:

Where We Get Our News