skip to main | skip to sidebar

After a few days of carrying this on my own I've been struck with blog apathy; also general apathy. I have zero desire to do anything other than sleep.

This is probably also related to the number of nightmares I've been having (two last night alone). Despite the fact that I own a stuffed tiger, he, unlike Hobbes, does not come alive when other people aren't looking, making him less useful for the fight against nightmares.

Of the two that I had last night, the first was pretty obviously an anxiety dream about my new job. I had to go to China on business and I forgot to bring any clothing. I was reminded by a group of major financial figures who were sitting at the airport on one of those bleachers that are provided at little league baseball games. I was really anxious, until I realized that I could probably buy clothes in China. Still, I was very nervous until I gave my ticket to the security personnel, then I woke up. 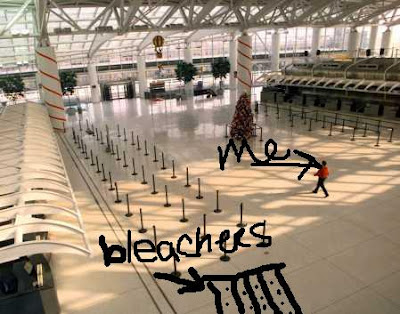 The second one was a bit stranger. (warning: and also graphic)I dreamt that I was fighting with some guy, whom I knew in the dream, but don't recognize in real life. We were physically fighting, joking at first, and then it became clear that he wished to do me harm, so I began to fight frantically. I am not a small person, but he was clearly winning. At some point I was about to scream, so he put his hand over my mouth, and I bit down on it. I somehow severed his thumb which stayed in my mouth. At that point I completely freaked out and woke up.

I briefly considered climbing into one of my roommates' beds, but as it was 6:30am it seemed like that might not go over so well for me. I can just imagine that conversation:

The Roommate: Um, Annie, what are you doing?
Me: I had a nightmare
R:Ok. That doesn't really explain why you are in my (twin) bed.
Me: I was scared.
R: Can you be scared in the living room?
Me: No, I'm allergic to our couch.
R: Oooook. How long are you planning to stay here?
Me: Just until it's time to get up.
R: (sighing) You are a bowl full of crazy.

Maybe my cousin will take me in.

I had to delete the previous comment because it contained too much identifying information. Basically my cousin promised to take me in, and reminded me that we've been lax in our mandatory "two nights a week of sleeping in the same bed" rule.

I dream extraordinarily complicated, densely plotted dreams non-stop every night, from before I even fully fall asleep right up 'til the morning (or at least it seems like that).

Recently I had a very involved, cinematic dream about a Brazilian rebel group in the late 1950s, headed by a beautiful femme fatale, in a secret base in the Amazon, attempting to foment revolution against the fascistic Brazilian military dictatorship by tapping into the current world space craze and starting a homegrown space program - to which end they had built a rocket gantry in the middle of a jungle clearing. I was involved in an outsider capacity. I think I might have been a journalist. Anyway, I thought to myself, "I HAVE to write this down as a book idea," so I leaned out of bed and wrote down a rough sketch of the dream's plot in my notebook. Then I woke up and realized that too had been part of the dream. Meta.

Michael- that makes me feel better. I think.

Where We Get Our News